The Dragon’s Back Day 2 Recce.

Day 1 video is here.  I woke up at 0005 and was on the road after making a coffee to go.  Google maps predicted 4:00hrs to drive to just west of Dolgellau.  I made good time and the V60 Volvo hire car was a lovely drive.  Automatic with lane assist cruise control and heating that made midnight driving a dream.  I arrived at about 0430 and was pleased the seat went all the back so I could get an hour of sleep.  Just as I woke up my partner for the weekend arrived.  I finished my preparations and offered to drive to Maentrwog so we could start the day.  We found a quality parking spot with toilets and brewed up.  The utility of the coffee bag coming into its own once more; don’t compromise with instant!  It was only as a bus went by I realised I was parked in the bus stop – in  fairness it was dark and another car was also parked there over the words.  I quickly moved the car to another quality lay-by (no plumbed toilets though).  After a false start of a couple of hundred metres when I had to back track to pick up my win sticks we were on our way.

The first few Km were on the road through Maentrwog.  The road soon starts to undulate and our pace slowed.  It is as easy section.  It is worth remembering that we were starting around 15Km into day 2 and would complete the first section the next day.

The route finding onto the fell is fairly simple and the watch breadcrumbs tied in.  CP5 by the reservoir will bring a welcome relief to pounding the roads but also the knowledge that the next CP is the support point.  We followed the recommended route and it is fairly quick and easy to follow.  I know I’d go a lot faster next time – poor gps/map fusion techniques are the principle reason.  I am currently putting together some thoughts on the best way to navigate – a fusion of gps and map.  The mystery of the long leg mentioned in years past is no longer that relevant as the inclusion of CP 4 and CP 5 forces you off the  roads.  There is a road route that may still work from CP 5 to the support point at CP 6.  It looks like it would be a very similar pace to the recommended route but if visibility is poor or it is really wet underfoot then the road may be a lot quicker.  I’ve added this section to my list of questions to answer before May.

The day had been cold and we’d transitioned from night to day.  I was wearing my Buffalo which I’d missed during the OMM.  I maintained a good temperature and wasn’t uncomfortable.  After the support point the path goes up and the hints of what lay ahead become more obvious.  There is a sign post leading off the recommended route to the Roman Steps.  This is where Huw has his doubts as he went the  recommended route on the recce.  Either appear valid although we went the signposted route.  The steps ascend quickly and are not uneven.  The recommended route which meanders around the crags is obvious.  Here the partly frozen fell became frozen rocks.  The scree slope above Llyn Du was like climbing ice cubes.  It would be a tough ascent in the dry.  In the wet it would concentrate the mind.  With each rock was coated in ice – verglas – no amount of graphene infused footwear would aid ascent.  Mike had some Yaktrax and they helped a little.  Progress was still possible using the vegetation poking through the ice as stepping stones.  My spidery senses were tingling – we were heading in to type 3 fun.  The type of fun which isn’t fun.

The type of fun which isn’t fun at the time, or even after and you’re just glad not to die.  At the summit Rhinog Fawr, in the clag, we sheltered behind the trig point for the summit pic.  During the climb we’d been sheltered from the wind, now on the summit it was howling.  Gusts were at least 50mph – making walking difficult and almost dangerous.  Foot placement had to be precise or we’d step on the verglas skating rink of summit rocks.  We soon realised that our chances of making quick progress south, into the freezing wind, without slipping and breaking something was not good.  We opted to trunaround and with the wind at our backs we descended the icy scree staircase.

We quickly made our way back to the top of the Roman Steps and with the danger now above us we made excellent speed to the forest of Coed y Brenin.  There was a bit of guess work to keep the ridge line to our right as the forest tracks meandered off the 5 day map (we had other mapping available).  We left the forest and navigated across fell towards where the forest started again and the route descends from the tops.  It was excellent fell country.  When I say excellent it is speaking of its qualities for helping strength train my core and ankles.  It was an ankle breaking field of death, babies heads, Dartmoor-esque, and progress was slow.  I was clock watching as I didn’t really want to be out  after dark – it wasn’t meant to be that much of an adventure!  We had to ‘vault’ a testicle trap of a barbed wire fence that wasn’t on the map and bisected the area.  Eventually, and not soon enough, we made it to the ‘old coach road’ marked on the GPS.  We were then able to trot along to rejoin the recommended route and back towards the car.  It then started to absolutely pour with rain.  I’d put on my heavy waterproof it was so bad. 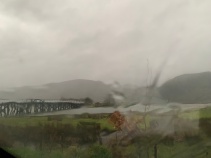 As we got close to the cars we identified the mandatory route leading to the campsite and headed towards the toll bridge of Penmaenpool.  I have a memory of this crazy toll cheap old bridge as a child.  It is a 20p pedestrian toll and quite a walk  around if you don’t have it (the people who operate are lovely though so maybe ask and they’ll let you through).  Back at the cars I needed to change quickly as I could feel myself getting cold.  I made an apology for being ‘jack’ and sitting in the passenger seat while the brews were on.  That brew and mug shot soup was very welcome!

We convoyed back to Pen-y-pass.  I think it’s the first time I’ve stayed there.  It’s a nice hostel although the kitchen was a bit of a trek from the reception and our room.  We showered, changed, filled the drying room and retired to the bar.  They have a selection of easy filling food on the menu and we opted for two pizzas.  They have a good range of beers including local ales.  I chose Brewdog’s 0.5% ‘Nanny State’ which has become my daily tipple.  I may also have had a sticky toffee pud.

The next day we were not out the door quickly although we did have a shorter drive.  We parked a car in Maentrwog and then drove to the lay-by at the base of Cnicht.  This cut out the 4-5km section of road at the start of day 2.  I was nervous as the forecast was not much better than the previous day.  As it happened, there was nothing to worry about.

We powered up the Cnicht climb which is obvious and not that steep.  It took about 50min from the road and 30min to complete the Strava segment, only 11min behind Marcus Scotney!  The route finding was simple and the descents were fast.  Some of  the recommended times (Moelwyn Fawr to Bach and descent) are bloody tough to hit.  I think I found a faster route to CP4 by the railway but it has the potential to waste a lot of time if the route is impassable due to access.  We didn’t quite descend on the right line – we were on the pipeline – and never made it east of the railway until the recommended route’s crossing.  The route back from there should be fast although we were a little relaxed and took longer than we should have.  We beat the rain and went our separate ways.

I stayed a further night in Pen-y-pass.  I’d  had the idea of driving to Machynlleth to arrive by 0700 and get the 0730 but to Dolgellau.  The forecast was for horrendous winds on the summits and after our adventures on the Rhinogs I was nervous about tackling Cadair Idris in trainers alone.  I opted for a later drive (after running to the Crib Goch sign and back) and then ran up fro

m the Day 3 support point to the summit of Tarren y Gesail (CP5) and back.  This was very useful and should help me save some time.  My placing on the Strava leaderboard was quite reassuring although there’s a lot of  work to do.  On the descent, sweat having permeated my clothing, I took the direct route through a puddle.  It was almost waist deep!  It took some strong core work to maintain my balance and avoid testing my iPhones’s IP68 rating.

I ate far too much in the hotel that night.  The drive back through the rain was marred with dealing with a call from the office and 3hour delay on the motorway which I skilfully avoided just in time.

Lots to do.  Five months to go.  Focused.